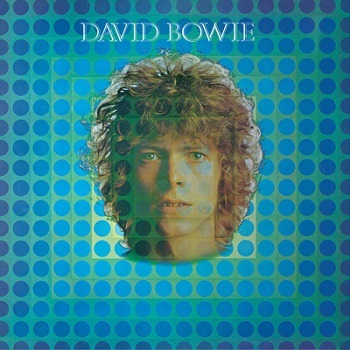 Commencing countdown, engines on
Check ignition, and may God's love be with younote The original British release.
Click to see the cover for the original American release. 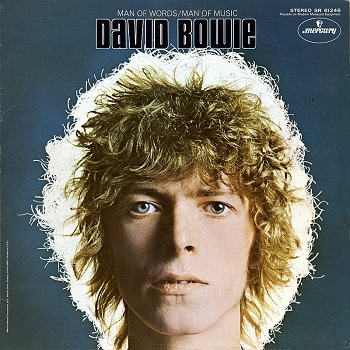 Click to see the cover for the RCA reissue. 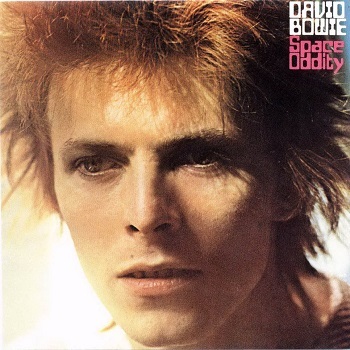 In my madness
I see your face in mine
I keep a photograph
It burns my wall with time
"An Occasional Dream"
Advertisement:

David Bowie is the second studio album by David Bowie, released in 1969. Shifting away from the heavily rockist sounds of Bowie's non-album singles throughout the decade and the art hall pop of his debut album, David Bowie presents the eponymous musician performing progressive folk and Psychedelic Rock influenced primarily by the works of Bob Dylan and the then-Syd Barrett-fronted Pink Floyd.

Due to it having the same name as his previous studio album from 1967 (both an example of Self-Titled Album), it was re-released as Space Oddity in 1972, which became the canon name for it. This was eventually reversed with a 2009 reissue, when it reverted back to the original self-titled name. As of Parlophone Records' 2015 reissue, the album officially goes by both titles, with the digital release using the moniker David Bowie (a.k.a. Space Oddity). For the sake of convenience, Space Oddity is the title used here on TV Tropes.

The album produced Bowie's first international hit, "Space Oddity", which peaked at No. 5 on the UK Singles chart in 1969, and was the first album where trademarks of his traditional style could be noticed: taking on an alter ego persona, space imagery... Still despite the hit song "Space Oddity", which was inspired by 2001: A Space Odyssey from 1968, the album wasn't a huge best-seller when originally released, missing the charts worldwide and never selling enough to meet any certifications. However, it reached the top 20 in both the UK (where it peaked at No. 17) and the US (where it peaked at No. 16) when it was reissued in 1972 by RCA Records, following Bowie's British commercial breakthrough with Ziggy Stardust.

While the album (sans "Space Oddity") is often overlooked in comparison to Bowie's later discography, especially his RCA-era output, it still stands as a historically significant entry in that it established a number of artistic techniques he'd carry over to his later material, particularly in regards to his lyrics and vocal performances. Though his musical style wouldn't truly start finding its footing until his next album, Space Oddity certainly laid the earliest groundwork for it via some of its harder-tinged and more Progressive Rock-inspired elements, which its successor would build upon further to form the definitive blueprint for Bowie's later work. Bowie's estate and Parlophone Records certainly didn't overlook this album either, devoting 2019 (the year of the album's 50th anniversary) to a massive release campaign devoted to box sets compiling various demos from around the time of the album's production, culminating in the comprehensive Conversation Piece box set on November 15 and a concurrent remix of this album in the vein of Giles Martin's treatments of The Beatles' latter-day albums.

Like its predecessor, David Bowie/Space Oddity was supported by two singles: the Title Track and "Memory of a Free Festival" (split into two parts on the single release).

"The trope machine is coming down, and we're gonna have a party!"