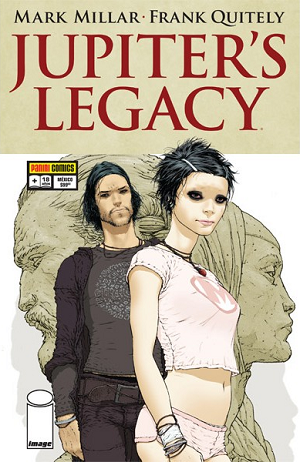 Jupiter's Legacy tells the story of the legacy of the Union, a superhero team formed in the 1930s. When six friends visited a mysterious island, they and their ship's crew were granted superpowers. The six combined to forge the Union, to help America out of the Recession and promote the country's ideals.

It's now 2013, and the new generations of heroes descended from the original gifted now face a different world, and disagree with their forebears on how to save the world.

Written by Mark Millar and drawn by Frank Quitely. There's also a prequel series called Jupiter's Circle, focusing on the Union in their heyday in The '50s and 60's. In the most recent publications, the trades for Jupiter's Circle were published as volumes 1 and 2 of the series and Jupiter's Legacy as volumes 3 and 4.

A sequel series called Jupiter's Legacy Requiem began to be released in 2021. Taking place years later, it follows how the next generation follows the footsteps of their parents.