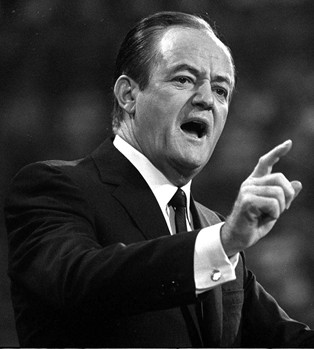 "To those who say we are rushing this issue of civil rights, I say: we are already one hundred and seventy-two years late!"
—Hubert Humphrey, speaking at the 1948 Democratic National Convention.
Advertisement:

Hubert Horatio Humphrey Jr. (May 27, 1911 – January 13, 1978) served under President Lyndon Johnson as the 38th Vice President of the United States (1965-69). Humphrey twice served as a United States Senator from Minnesota, and served as Democratic Majority Whip. He was a founder of the Minnesota Democratic-Farmer-Labor Party and Americans for Democratic Action. He also served as Mayor of Minneapolis, Minnesota (1945-49). Humphrey was the nominee of the Democratic Party in the 1968 presidential election but lost to the Republican nominee, Richard Nixon. After his loss, Humphrey would return to the Senate where he spent the rest of his life. He died during his term, suffering from incurable bladder cancer.

Humphrey was well known in his career for being extremely talkative as well as for his early support for civil rights legislation. His image, like Johnson's, suffered incredibly during the Vietnam War, but would later recover sufficiently during his lifetime and afterwards.

These tropes related to Humphrey's appereances in media are pleased as punch to be here: