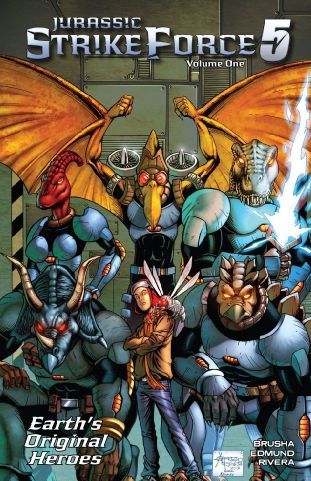 The Strike Force dinosaurs. And Tyler.

Jurassic Strike Force 5 is a comic book published by Zenescope and written by Neo Edmund and Joe Brusha, with JL Giles-Rivera as the illustrator.

In the midst of Antarctica, a team of scientists digging through the earth discover a strange compound with markings surrounding it. The scientists breach the compound, only to awaken an alien overlord named Zalex and his squad of evil dinosaurs who have been hibernating for millions of years. With his dinosaurs as his disposal, Zalex begins his quest to enslave the universe, with earth being his first target.

Elsewhere, another team of scientists make a discovery of their own: a group of dinosaur soldiers whose main goal is to stop Zalex and his army. After they're also awakened and discover that Zalex is plotting to take over the world, they team up with Tyler, one of the scientists' sons, and try to stop Zalex before he controls the world.