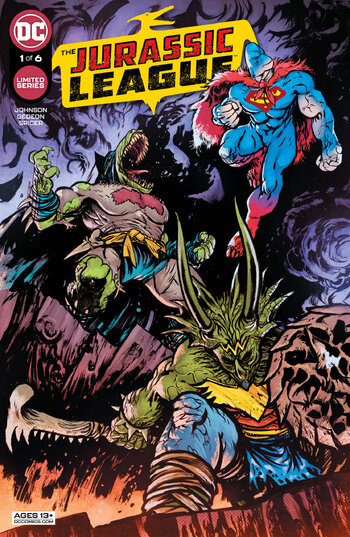 A comic 65 million years in the making
Advertisement:

You know the story: an infant escapes the destruction of its home planet and is deposited on Earth to be raised by human parents. A goddess from a lost city defends truth. An Allosaurus dons the visage of a bat to strike fear into evildoers’ hearts. Wait...what? Okay, maybe you don’t know the story.

The elevator pitch of the series being reimagining of the heroes and villains of the DC Universe as Dinosaur-themed Animal Superheroes. In this prehistoric world, a heroic trinity of Supersaur, Wonderdon, and Batwalker, alongside a league of other super-powered prehistoric animals, join forces to save a prehistoric Earth from the sinister machinations of Darkseid.