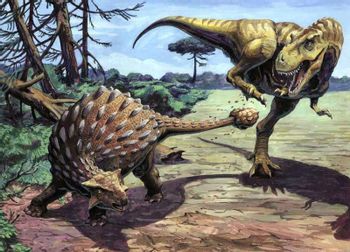 Similarly to ceratopsians, the thyreophoran dinosaurs (the stegosaurs and ankylosaurs) have a reputation of a tough prey for big theropods, often being referred to as the "tanks" of the dinosaur world.

Stegosaurs and ankylosaurs (especially the former) are also a frequent subject of Dumb Dinos, the fact that Stegosaurus is often stated to have one of the smallest brains among dinosaurs has contributed to this reputation.

Popular portrayals of armoured dinosaurs vary a lot in personality, but they tend to default towards being portrayed as tough, aggressive, and none-too-bright, as well as having having large appetites. Occasionally, they will be portrayed as Boisterous Bruisers. In short, they have a reputation as Dumb Muscle.

Compared with ceratopsians, stegosaurs tend to appear more of a sort of Badass Gentle Giant dinosaurs — mostly placid and nonviolent, but still able to defend themselves if necessary. Ankylosaurs usually share the same treatment but tend to be more aggressive and temperamental than stegosaurs.

While stegosaurs can be either solitary or sociable among each other, ankylosaurs are usually depicted as aggressive, territorial loners.

Fictional stegosaurs are usually either Stegosaurus or its smaller, spikier relative Kentrosaurus, whilst fictional ankylosaurs will usually be Ankylosaurus itself, or occasionally Euoplocephalus, Edmontonia, and Polacanthus.

Like ceratopsians, ankylosaurs and stegosaurs will often be depicted facing off against the resident big theropod of their time period — for example, Stegosaurus is often shown battling Allosaurus, while Ankylosaurus often does this with Tyrannosaurus rex (and so does Stegosaurus on occasion, for that matter).

See also Beware My Stinger Tail, often applied to both stegosaurs and ankylosaurs. Compare with Temper-Ceratops, Gentle Giant Sauropod, Aquatic Hadrosaurs, Social Ornithopod, and Headbutting Pachy, which are other plant-eaters of the dinosaur world. For more information about depictions of the Stegosaurus in popular culture, see this link.