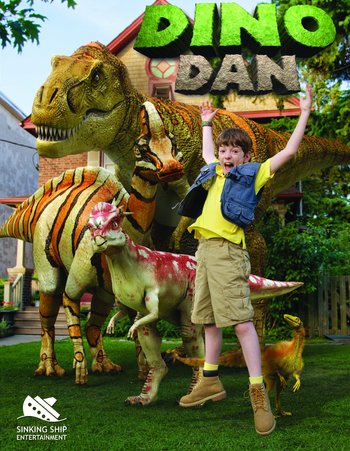 Dino Dan is a live action television series on both TVO in Canada and Nick Jr. in the US.

It follows the adventures of a young boy named Dan who is obsessed with dinosaurs. He lives and breathes dinosaurs. He seems to be the only one who is able to see the dinosaurs in his neighborhood, though it's never explained how he's able to, whether they are real or simply products of his imagination.

After a brief hiatus, it was revived as Dino Dan: Trek's Adventures, this time focusing on Dan's younger brother taking up Dan's "mantle". It also now has a counterpart on Amazon called Dino Dana.