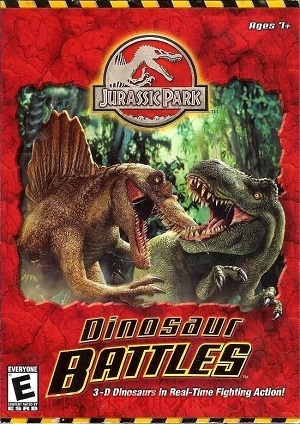 Jurassic Park: Dinosaur Battles is a 2002 video game Mon-style Fighting Game developed and published by Vivendi Universal for the PC and based in the Jurassic Park series. It is one of the several spin-off titles of Jurassic Park III, alongside games like Dino Defender and Danger Zone.
Advertisement:

An expedition team conducted by Harrison Manly to find and discover new lands and animals and consisting of five winners of the Harrison Manly Junior Explorers Expedition Team goes horribly awry when on their way to the Cabo Blanco Nature Reserve accidentally make their way to Site B. There, unaware that the island is infested with dinosaurs, the group is suddenly attacked, leaving them separated all across the island. An InGen agent arrives to help and stumbles across a laboratory, finding the notes of Dr Irene Corts, an InGen scientist who states that she is able to not just clone and genetically engineer dinosaur, but also control them. The agent also discovers a DinoVoc, a device created by Dr Corts that allows the user to control dinosaurs and order specific commands.

The agent eventually obtains a Velociraptor and eventually sets out to find and rescue the five lost kids and discover what is going on regarding Dr Corts.

The following provides Tropes for