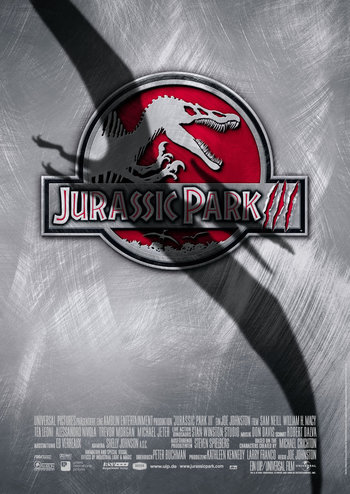 "Great, just great. Here we are in the worst place in the world, and we're not even getting paid."
— Alan Grant
Advertisement:

The third Jurassic Park movie, directed by Joe Johnston and released in 2001. Unlike the first and second films, it's not a direct adaptation of Michael Crichton's novels, though it does incorporate scenes from the books that were left out of the previous two movies. It is also the shortest Jurassic Park movie (92 minutes).

As the years have passed, Isla Sorna and Isla Nublar have fallen into disrepair, the laboratories and training facilities now entirely abandoned — at least by humans, anyway... There are rumors of the deaths of people who came too close or were foolhardy enough to land, and the natives living on the neighboring islands never visit either island, which are known as "The Five Deaths". Instead, the place has become a tourist trap for people hopeful to see its dinosaurs from sea and air.

Alan Grant (Sam Neill) and his protégé Billy, are asked to be tour guides to a rich couple, the Kirbys, and their company, who desire to see Isla Sorna. They need funds for their paleontological research, so they agree. But not until they arrive there is the truth revealed: the party is not there as tourists, but as rescuers to the couple’s son, Eric, who disappeared near the island eight weeks ago.

And guide or no guide, Alan Grant seriously doubts that any of them will get off Isla Sorna alive...

Followed by Jurassic World, which came out in 2015 after over a decade of Development Hell.

These aren't on InGen's list, but Jurassic Park III displays the following tropes: