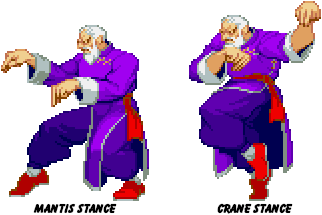 The ability to switch between sets of abilities or attack styles. The Stance System is frequently used to make it possible to map a large number of actions to the finite number of buttons on a controller without resorting to increasingly complicated combos. Each action may require as little as a single button press to execute, but the same buttons will perform different actions depending on the stance the character is currently in. The character's current stance may be visually accompanied by a change in Idle Animation.

Normally a stance remains as-is until switched, a less-popular variation gives a character access to a new series of moves, but only for a short window of time before going back to their base stance.

See also Dual Mode Unit. Compare Job System. If the change in stance is accompanied by a change in physical form then you probably have a Swiss Army Hero on your hands.