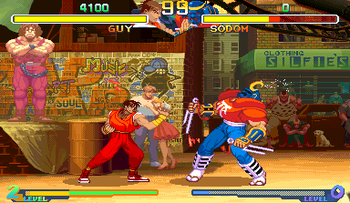 In Video Game Settings, the Graffiti Town is a lighter version of Gangster Land where the action takes place in a modern urban area that has all the stereotypical elements of being "urban": tall brick apartment buildings with some wear and tear, elaborate and/or gigantic graffiti on the buildings, and tall chain-link fences. The stage music is usually in the hip-hop genre. Note this setting has to have exaggerated features of heavy urban areas, like downtown Los Angeles or New York. So Liberty City from Grand Theft Auto can't count because the environment is relatively realistic compared to what is described here.
Advertisement:

Some basketball video games may have this as a court instead of the usual sports stadium. Not to be confused with Art Course.