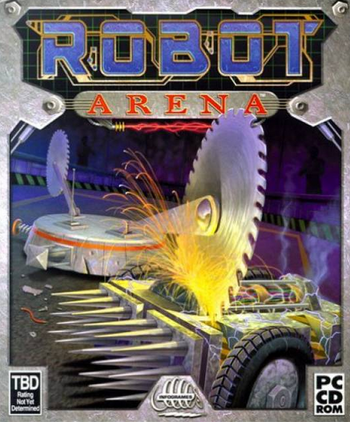 Robot Arena is a series of PC games by Gabriel Interactive, where you design a robot and have it fight against other robots. It is very similar to the TV shows and real-life tournaments BattleBots and Robot Wars.

The first game was released on March 24th, 2001, and was widely panned for a lack of customization, very few chassis' and weapons, and the game was two dimensional, meaning that wedges and flippers were not able to be used. Then, the 2003 sequel, Robot Arena 2: Design and Destroy, improved on everything, allowing you to build the chassis on a grid, and allowing you to choose from a lot of different weapons and parts. Thus, the game has a small but very dedicated fanbase.

After a hiatus lasting for more than a decade, a third game

was released on Steam Early Access in May 2016, only to be abruptly made into a full release the following month, in spite of pretty much all players agreeing the game was nowhere near ready.

Also, these games are unconnected to the 2010 Adobe Flash game

The third game provides examples of: