The Joys of Torturing Mooks 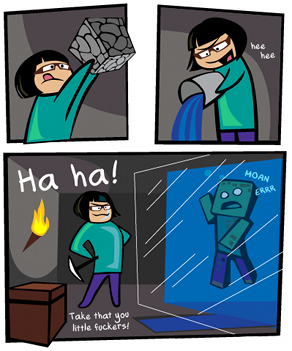 on The Force Unleashed
Advertisement:

Or, what happens when What Measure Is a Mook? makes out with Video Game Cruelty Potential. Most video games don't flag character actions on the Karma Meter as being evil, as long as they're committed against evil characters. Most cool-looking moves look incredibly painful, and may even have Mooks crying out in agony. Mmm, the sadism.

Now, strictly speaking, you might not be allowed to kill the little buggers, but this is only a minor restriction when player actions include things like audibly breaking your enemy's bones. In other words, even if they're not dead, those pitiful mooks will be in horrible agony for the rest of their lives as a result of your vicious beatdown. Enjoy, sadistic player!

See also Set a Mook to Kill a Mook, if your brand of sadism tends towards "divide and conquer". When the perspective is more aligned to the mook in this situation and how terrifying it would be for them to face the hero, it's a Mook Horror Show.