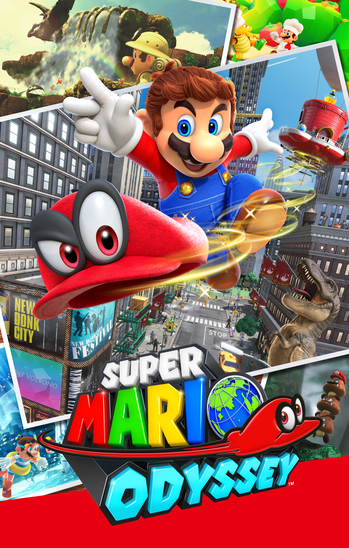 Super Mario Odyssey is the first main series game in the Mario franchise for the Nintendo Switch, released on October 27, 2017. After the more linear level designs of the Galaxy duology and 3D duology, Odyssey marks a return to the more exploration-based formula used by 64 and Sunshine.

Bowser has once again kidnapped Princess Peach, this time with the intent of forcing her to marry him, and Mario must leave the Mushroom Kingdom, journeying to fantastic other worlds to save her. This time, however, he's not alone. Joining him on his journey is a spirit named Cappy, who's aiming to rescue his sister Tiara from the Koopa King, as he uses her as Peach's wedding tiara. Realizing the two share a common goal, Cappy possesses Mario's hat and allows Mario himself to Capture things, ranging from enemies to bystanders to nearby objects.

On his journey around the world, Mario will have to travel to various Kingdoms (based on real-life regions) and collect Power Moons to power the titular Odyssey, the ship Cappy uses to travel. Opposing Mario are Bowser and his army, as well as the Broodals- a group of five rabbit wedding planners who are aiding Bowser in stealing various items for the wedding, and were also hired to stop Mario.

and the gameplay trailer can be seen here