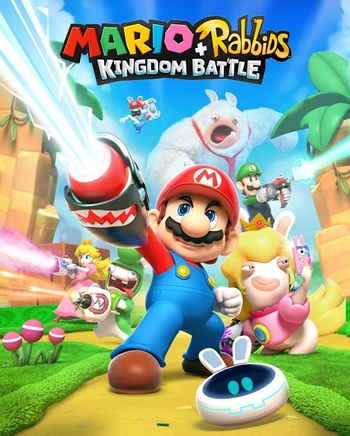 Mario, his friends, and the Raving Rabbids in a crossover for the ages.
Advertisement:

Mario's been host to a lot of strange crossovers over the years. The plucky plumber has gone to the Olympics with former rival Sonic the Hedgehog, played basketball with NBA all-stars (and the Beastie Boys) in NBA Street V3, hit the slopes in SSX, dabbled in a bit of Puzzle & Dragons, busted a move in Dance Dance Revolution, played some sports with the some Final Fantasy characters (and a Slime), brokered stocks and made real estate deals with Dragon Quest characters, saw his villains make a visit to the world of Skylanders, fought the entire Nintendo pantheon (and then some), and even teamed up with a paper version of himself!

Mario + Rabbids Kingdom Battle is a Nintendo Switch-exclusive Turn-Based Tactics adventure game by Ubisoft Milan. It is a crossover between Nintendo's Super Mario Bros. and Ubisoft's Raving Rabbids. It was released on August 29, 2017.

During one of their time-traveling escapades (a hobby previously established in Raving Rabbids Travel in Time), the Rabbids find themselves in the basement laboratory of a Super Mario fangirl and get their hands on her newest invention: a Merging Machine known as the Supa-Merge. Accidentally using it on their time machine and a bunch of Mario memorabilia, the Rabbids open up a dimensional rift from their universe to the Mushroom Kingdom that causes the latter world to become unstable. Furthermore, the Supa-Merge has gone haywire in the process, and is corrupting all but a handful of Rabbids to villainy. Now Mario, Luigi, Yoshi, and Peach have to save the Mushroom Kingdom from both the invading twisted Rabbids and Bowser Jr., who wants to claim the Supa-Merge while his father is on vacation, alongside a few Rabbids who haven't turned evil.

On June 12, 2021, a sequel to the game was announced. Titled Mario + Rabbids Sparks of Hope, it sees Mario and the Rabbids journeying through outer space to defeat a malevolent entity. It is set to come out on October 20, 2022.

Princess Peach is burned by a fire attack, forcing her to run around the playing area until she puts it out.

Princess Peach is burned by a fire attack, forcing her to run around the playing area until she puts it out.