True, both the Super Mario Bros. and Raving Rabbids franchises have their respective character pages, but this game adds many unique characters due to the Reality Warper nature of their different worlds colliding. This page will mainly be focusing on the characters as they are portrayed in this game.

Heroes (in Order of Appearance) 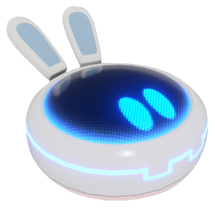 A puck-shaped robot that was the Robot Buddy of the unseen inventor at the start of the game. He is caught up in this adventure when he is sucked into the Rabbid's Washing/Time Machine due to their havoc and sent falling into the Mushroom Kingdom. Mario saves him, and he quickly explains what happened, resolving to lead the group and finding Spawny before things go From Bad to Worse.
Mario 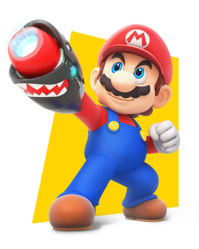 The famous man in red himself, and hero of the Mushroom Kingdom — Mario was attending the reveal of Princess Peach's statue when the Megabug vortex appeared in the sky and sucked the kingdom and its inhabitants into it, creating the Hybrid Mushroom Kingdom he finds himself in. Guided by Beep-O and allying with some of the more affable Rabbids dressed as Peach and Luigi, Mario seeks to get to the bottom of the fusion and save the Mushroom Kingdom from being torn apart by the Rabbids.
Rabbid Peach 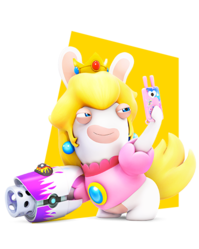 A Rabbid that dresses up like Princess Peach due to wearing a Princess Peach Wig and using a cellphone when shot with the Supa-Merge. Rabbid Peach is the first Rabbid that Mario meets, and she takes a romantic shine to him. While he doesn't seem to mind, he certainly finds it excessive and somewhat exhausting. She's fairly haughty and has a mischievous nature, and when she interacts with Peach herself, she becomes a Clingy Jealous Girl.
While using a simple blaster in the first game, Sparks Of Hope has her switch out for the Triple-Troll missile launcher, which fires three projectiles at a single target that can ignore partial cover.
Rabbid Luigi 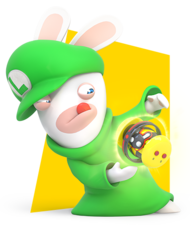 A Rabbid wearing an oversized green shirt and cap to mimic Luigi's style. Rabbid Luigi is an adorably chipper, friendly creature playfully excited to help Mario save the world from going From Bad to Worse, and becomes a bit more enthused when he meets the real Luigi for the first time. His main weapon is a yoyo-like device whose lowish damage is compensated with a high critical rate, while his secondary weapon is a rocket launcher with a long range, and which can catch multiple enemies in its blast radius. In Sparks Of Hope, he trades out for the Discruptor, a throwing disk that ignores partial cover and can bounce to hit a chain of enemies as long as there is a clear line between them.
Advertisement:
Luigi 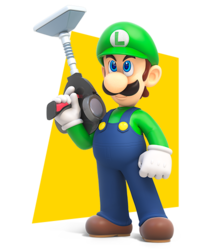 The King of Second Bananas, Luigi is the famous other half of the Mario Bros, found in the jungle after being sucked up into the Megabug vortex in the beginning. He's a bit of a fraidy cat, but is always willing to lend a hand when he is needed. He's a good sniper, but has fairly low health.
Rabbid Mario 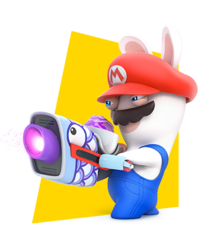 A Rabbid that dresses like Mario due to being shot with the Supa-Merge while wearing a Mario cap. He idolizes Mario, and as such acts very confident. He wields Boomshots that deal more damage up close and can destroy cover quickly. In the sequel, he uses a pair of gauntlets referred to as "The Dukes" which have very short range, but completely ignore cover and hits a large area in front of him.
Princess Peach 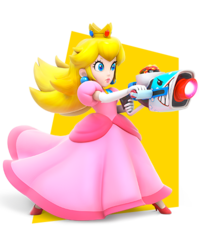 The princess of the Mushroom Kingdom, Princess Peach was lucky enough to be returned to her castle following the appearance of the Megabug. There, she welcomes Mario and his team back and is free to talk to. Of course, as you might have guessed, the Princess herself eventually joins the heroes on their quest.
Rabbid Yoshi 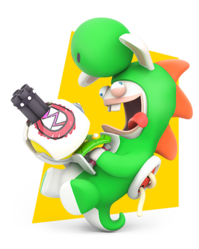 A Rabbid in a Yoshi suit. He is the last Rabbid to join the team. Seemingly wild and unstable (even more than most Rabbids), however, he still joins the heroes with his strong defense and long-range weapons.
Yoshi 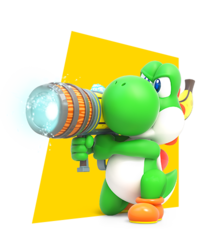 Hailing from Yoshi's Island, Yoshi is the last of the four heroes to join the party.

Ziggy
Rabbids that can dash into heroes and use Villain Sight to shoot anyone that tries to approach them.
Hopper
Rabbids that can perform Team Jumps to maneuver around the battlefield and protect themselves with barriers.
Smasher
Hulking Rabbids that try to flatten their enemies with heavy pillars, they'll chase anyone that attacks them with a weapon, and can increase their attack.
Supporter
Rabbids that can heal their teammates and attack with grenaducks.
Buckler
Large Rabbids that come with shields, powerful Boomshots, and the ability to land guaranteed critical hits.
Peek-a-boo
Ghostly Rabbids that can teleport and draw heroes to them.
Valkyrie
Rabbids dressed as valkyries that can protect their allies and perform ground pounds. 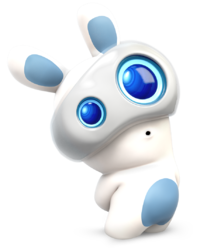 The Rabbid that merged with the Supa-Merge Goggles themselves after overheating them. Though not intentionally evil, his merging of other Rabbids with various threats drives the game's conflict.
Bowser Jr.

The son of Bowser, the Koopa King. When he learns about Spawny's abilities, he tricks the Rabbid into joining him. With Spawny by his side, Junior intends to create an army of Rabbids to conquer the Mushroom Kingdom, all to impress his father while he's on vacation.
Pirabbid Plant
A Rabbid sleeping with a Piranha Plant in the Ancient Gardens get who fused when Spawny wakes the plant up and becomes scared. Pirabbid Plant simply looks like a rabbid in a Piranha Plant costume, controlling a plant pot full of vines and wielding a staff. Its main attack is a bazooka shot with area damage.
Rabbid Kong
The boss of the the Ancient Gardens. A combination of a Rabbid and an unknown Donkey Kong-related object, with a fitting appetite for bananas. After his defeat in World 1, he becomes the Big Bad of the Donkey Kong Adventure DLC.
Blizzy and Sandy
A pair of elite Rabbids created when Bowser Jr. shoots Spawny's laser at a large column of sand and ice with Rabbids entrapped inside. Blizzy sits on top of a whirlwind with orbiting snowballs, while Sandy sits on top of a dust devil and carries burning cacti grenades.
Icicle Golem
The boss of Sherbet Desert, a massive and intimidating Rabbid made from snow and ice crystals, who uses an equally massive fridge door to protect itself. It freezes the heroes, then takes one of them hostage when Peach arrives to save them.
Calavera
A ghostly Day of the Dead-styled Rabbid mini-boss that controls a wood coffin infested in spiked tendril-like vines, attacking and capturing Rabbid Yoshi in Spooky Trails before turning his attention to Mario's group. Uses the coffin lid as a shield.
Phantom/"Tom Phan"

Bowser Jr. pretends to be a "helpful" character by advising the heroes to wake a being named Tom Phan, who supposedly has the power to defeat Bowser Jr., by sending Beep-O texts throughout the Spooky Trails level and leading them into a trap.

A fusion of a Rabbid, an inflatable Boo, and a phonograph, the Phantom is created on a stage-like battleground and instantly gains a rivalry with Mario, insulting and attacking him through song and literally hogging the spotlight.
Bwario and Bwaluigi
A duo of Rabbids that Mario and the other heroes face in World 4 that bare resemblance to a familiar dastardly pair. Bwario appears to be a combination of the Ziggy and Valkyrie classes by having Villain Sight, wielding a Gatling gun, and being capable of performing a Ground Pound through a Team Jump while Bwaluigi is a Smasher.
Lava Queen
A female Rabbid that looks like a Valkyrie enemy with glowing armor and eyes, the Lava Queen joins Bwario and Bwaluigi in their second fight against the heroes. Seems to have somewhat of a thing for Mario.
Bowser (UNMARKED SPOILERS)

The King of the Koopas himself... Who is on vacation for most of the game.
Megabug (UNMARKED SPOILERS)
A virus created after the Rabbids' time washing machine is zapped with the Supa-Merge, the Megabug is a vortex that is responsible for dropping the Rabbids into the Mushroom Kingdom and casts a shadow over the plot of the game.

A female Toad in pink, she is essentially Toad's companion in exploring the bizarre lands of the Mushroom Kingdom that have been altered by the Rabbids' invasion.
Genius Girl

An unnamed inventor that appears in the intro cinematic. She invented the Supa-Merge in the first place. 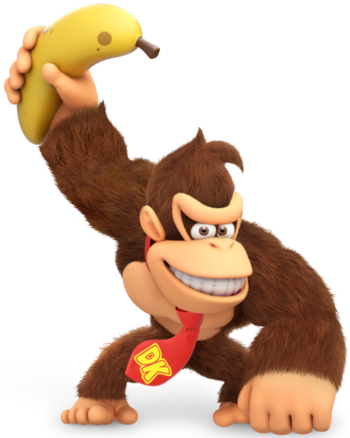 The first hero character to be announced in the Spring 2018 DLC, Donkey Kong Adventure. Like any good king of swing, DK is able to swing on vines suspended in the air by dandelion puff balls. In lieu of a jumping ability, he can grab allies and enemies alike and throw them.
Rabbid Cranky 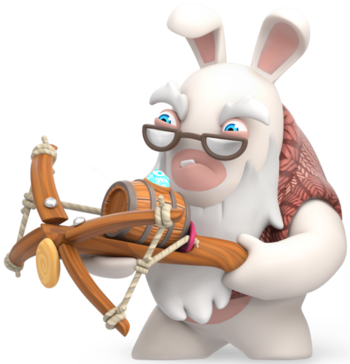 Collectors
Rabbids that have stolen parts of the washing machine. Unable to fight but have excellent mobility.
Smugglers
Smashers repurposed to carry bad bananas to their goals. They act similarly to Smashers, except they are trying to reach a certain spot on the map.
Summoner
Exactly What It Says on the Tin, summoners are supporters that can summon enemies to fight alongside them.
Side Eye
A cowardly hammerhead shark Rabbid.
Finn
A large shark Rabbid missing his right eye.