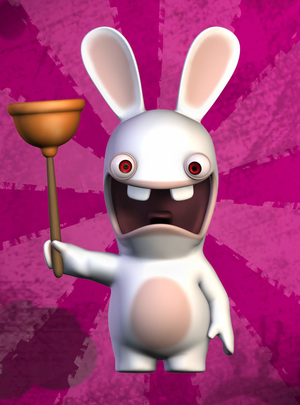 Raving Rabbids is a video game series published by Ubisoft Entertainment. It was originally a spinoff minigame-centric series based on Rayman, but its popularity quickly escalated to surpass that of Rayman himself. It later became its own standalone franchise starting with Rabbids Go Home.

The first game in the series is entitled Rayman Raving Rabbids. In this first installment, the limbless hero Rayman was captured by the Rabbids and forced to participate in various absurd mini-games in a gladiator-style arena to entertain the moronic bunny masses. As you progress through the game, Rayman uses the plungers he receives as rewards for completing minigames (It makes sense in... Wait… no, it doesn't make sense at all!) to build a makeshift ladder and escape through a high window. Even though he escapes, the game still has a rather silly Downer Ending, as Rayman realizes afterwards that he forgot to rescue the baby Globoxes imprisoned by the Rabbids. And then he got stuck in a hole.

The second game, Rayman Raving Rabbids 2, is set with the Rabbids launching a full-scale invasion on Earth. Rayman infiltrates the operation by dressing up as a Rabbid and following them to Earth in order to stop their plans of taking over the foreign planet. The game is more based around party-style multiplayer gameplay, and beyond the opening introduction the plot disappears, even going so far to not include an ending sequence or automatic "end-of-game" credits roll. However, it is shown that the Rabbids are thwarted after selecting the credits roll, as several signs around the world show that no submarine parking is allowed. Thus, the rabbids leave.

Rayman Raving Rabbids TV Party is the third game in the series. In this game, Rayman is for the first time only present in the cutscenes and is not a playable character, further pushing the Rabbids series away from its roots. The game begins with Rayman running away from a mob of Rabbids and hiding in a nearby house. Lightning strikes the Rabbids outside, mysteriously trapping them inside of the TV of the house Rayman takes refuge in. The TV remains constantly powered up and works even if it is unplugged, and the cutscenes of the game consist of Rayman attempting to destroy or get rid of the TV. The gameplay itself is set inside the television as the Rabbids participate in various minigames themed after the different TV channels and programs. The further the game progresses, the more frustrated Rayman becomes by the constant noise and distraction of the TV and attempts to get rid of it in several different ways, causing gradual damage to the television and the screen to crack further and further. By the end, Rayman becomes angry enough to take off his shoe(and his foot, incidentally) and throw it at the TV, which finally breaks, releasing the Rabbids inside and causing the chase from the beginning of the game to start all over again.

The fourth installment of the series is entitled Rabbids Go Home and deviates greatly from the previous titles by being an item-collecting platformer instead of a minigame collection, and it is the first time the player teams up with the Rabbids. In this game, the Rabbids are living in a junkyard and become nostalgic for home. Since they're stupid and forgetful, they don't know where their home is — but then decide that (1) their home is the Moon, and (2) they need to build a pile of junk so they can climb to it. To get stuff for their pile, they raid a nearby human city, stealing everything they can and putting it into a shopping cart. The humans, who naturally don't take very kindly to this, form an organization known as the 'Verminators' to exterminate the Rabbids and get back all the stuff they've stolen. The successful ending of the game shows the Rabbids making their pile big enough to indeed seemingly reach the moon, but right as they're discovering that it isn't really in the sky, the Verminators bomb their huge pile. The pile of stuff goes flying into space, Rabbids included, and the Rabbids reach their 'home' in orbit around the moon. Needless to say, Rayman doesn't appear in this story at all.

The latest games in the series, Raving Rabbids Travel In Time and Raving Rabbids: Alive & Kicking, are a return to the mini-game collection of the earlier titles. The latter of the two is exclusive to the Xbox 360, designed for the Kinect, and is the first game in the series not to appear on a Nintendo Console. These games do not include Rayman, and since another game entitled Rayman Origins has since been released with no sight or even mention of Rabbids, the two can safely be considered separate series.

Nickelodeon obtained the rights to making an animated series about the creatures and co-produced it alongside Ubisoft. The show, Rabbids Invasion, began airing in July 2013. A full-length movie under Sony and Ubisoft was announced in 2014.

At E3 2017 it was announced that the series was having a crossover game with Super Mario Bros.. Unlike the other Raving Rabbid games, Mario + Rabbids Kingdom Battle is a tactical adventure game.

For tropes in the non-mini-game title Rabbids Go Home, click here.
Games in the Series