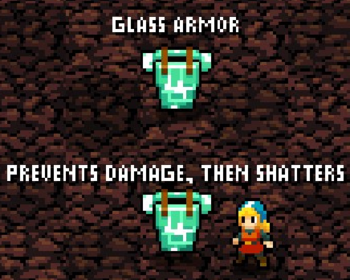 A shield or any other sort of Power-Up that goes away after one hit; essentially a One-Hit-Point Wonder as a power-up instead of a character's default state. As a power-up, it can also provide effects beyond its ability to take an extra hit (see Breakable Power-Up).

See also Bandit Mook and Mooks Ate My Equipment for things that can treat ordinary armor as One Hit Point Wonders, unlike the rest of the game.