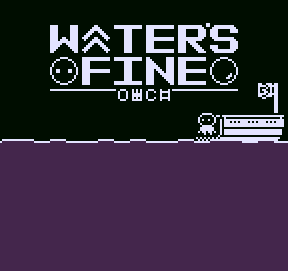 Come on in.
a procedural diving game
with two endings

Just a simple pixel art game where you're a diver swimming in the ocean. Come on in, the water's fine. Surely there's nothing dangerous down below, right?

Water's Fine is a procedurally generated diving game created in 2018 by a single game developer simply known as "OWCH" or Chloe on itch.io. In the game, you play as Wave, a diver seeking to dive to the bottom of a deep trench. With every descent, the game randomly generates a series of obstacles, enemies, and items for the player to navigate or collect. Once you've collected some treasure (represented by bags of money), you can spend it on upgrades at the shop boat manned by a dog.

The game can be purchased here