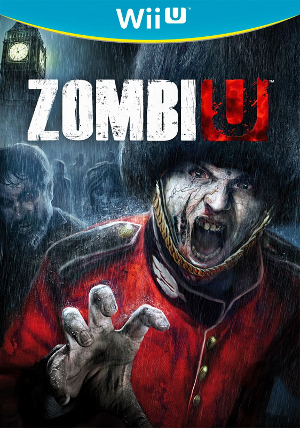 How long will you survive?
Advertisement:

ZombiU is a Survival Horror game with First-Person Shooter elements developed by Ubisoft exclusively for the Wii U, released as a launch title for said console in November 2012. You play as a human trying to survive a Zombie Apocalypse in London, but with one big twist... when you die, you stay dead, and restart the previous mission as a new survivor without any of the skills learned or items acquired previously. The story is told through interaction with the handful of Non Player Characters scattered throughout the game; mainly the mysterious man who guides you through the city and seems to know more about the events surrounding the zombie outbreak than he lets on.

Originally expected to be a fairly generic zombie game, ZombiU was maybe the first attempt in years by a non-indie developer to resurrect the classic Survival Horror game, then regarded as a dead genre with virtually every horror game having tons of action or none at all. The game's polarizing reviews (ranging everywhere from an awful 4.3/10 to a stellar 9.3/10) and poor sales (resulting in the planned sequel being canned) led to debate over the viability of the genre in the modern era, until Resident Evil 7 put the question firmly to rest.

While the game shares elements with one of Ubisoft's first games, the 1986 PC title Zombi, it is not a reboot.

The game received a port

to the PlayStation 4, Xbox One, and Microsoft Windows (via Steam) as Zombi.