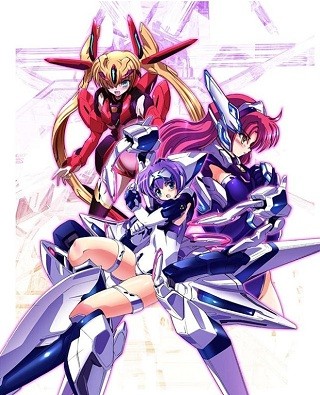 Squeeze the trigger of your heart.note Counter clock-wise from bottom: Exelica, Crueltear, and Faintear.
Do you like bullet hell shoot'em ups? Do you also like mecha-musumes clad in skin-tight bodysuits? Then you'll enjoy the combination of the two with Triggerheart Exelica.
Advertisement:

Triggerheart Exelica is a vertically-scrolling shooter by the small video game development team of Warashi. It was first released to arcades in Japan on the Sega NAOMI hardware in 2006. The game's storyline is set in the future where the interplanetary defense organization of Tilde have created Artificial Humans known as "Triggerhearts" to hold back the forces of the militant Ver'mith. Unfortunately, two Triggerheart sisters — the energetic Exelica and the Hot-Blooded Crueltear — fell through one of the Ver'mith's emergency escape wormholes during battle, which leads straight to Present Day Earth. Cut off from everyone and everything they ever knew, the two Triggerhearts begin to lose hope and question their purpose for living. It was then that they decided to try and live a normal life... That is, until the day that a massive wormhole appears over Earth, signalling the start of a full-scale Ver'mith invasion, led by none other than another Triggerheart: one that Crueltear recognizes as Faintear.

In this game, players can play as one of the two Triggerhearts, either Exelica or Crueltear, and they can either gun down the horde of Ver'mith trying to take over the Earth the old fashion way, or make use the Triggerhearts' Anchor Shot against the Ver'mith — be it a small drone fighter or a battleship the size of a 747 — and swing them around like a ball-and-chain, hurl them against each other, or even use them as a shield, and you do this to score points. Although not all enemies are fair game to picked up by and ready to be abused the Triggerhearts' Anchor Shot; in the case of bosses or grounded enemies, the anchor will latch on to the enemy and Triggerhearts gunfire will go along the anchor's line a for stronger, pin-point attack. Another unique feature of the game is the Dynamic Difficulty of its boss battles; the bosses in Triggerheart Exelica uses a Variable Boss Attack System (or V.B.A.S. for short) to determine how hard they are willing to fight. Generally speaking: the more Medals you rack up, the harder they will fight back.

After its arcade debut, the game was ported to various video game consoles; it was first released in 2007 for the Sega Dreamcast (yes, really) in Japan as its penultimate titlenote Karous being the final one., then later to the Xbox 360 via Xbox Live Arcade world-wide on February of 2008, and finally to the PlayStation 2 (published by Alchemist) with an Updated Re-release as Trigger Heart Exelica -Enhanced- only in Japan. The PlayStation 2 re-release features a fully-voiced Story Mode (that the Xbox LIVE Arcade version never received), a new playable character (the original, non-evil Faintear), complete with a shiny new Anime Theme Song opening.

As of July 28, 2016, the Xbox 360 version of the game has became backwards compatible for the Xbox One, coinciding with the game's 10th Anniversary. A series of official doujinshi by Kazuhiko Kakoi, Trigger Heart Exelica RE:Anchor were also published at the beginning of 2016, which explores new concepts and ideas for a potential sequel.