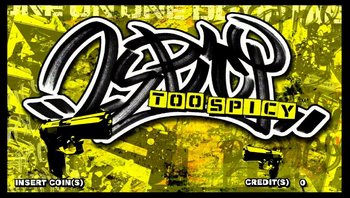 Also known as 2Spicy, Too Spicy is a Light Gun Game made by Sega that is notable for also having characteristics of a Third Person Shooter.

In it, the player controls one of six Terminator-esque humanoid robots (Laurence, Ming-Hua, Charlie, Alexander, SICKS and Tetsuya) in either a one or two player versus duel mode or a story mode.

The game differs from other light gun shooters in that it not only provides versus multiplayer, but is controlled from a third-person perspective that allows you to control your characters' movements on a 2D plane with foot pedals.

The gameplay usually consists of duels between two characters, constantly shifting between cover objects in order to gain the upper hand. The game also has a remarkably long play-time for an arcade game, with the versus mode easily taking around 30 to 50 minutes to complete on $2.00, and the story mode (which is unique for each character) taking even longer for the same amount of money.

The game also features heavy use of Hong Kong action movie-style effects and locales, and each of its characters represent action movie or game archetypes.