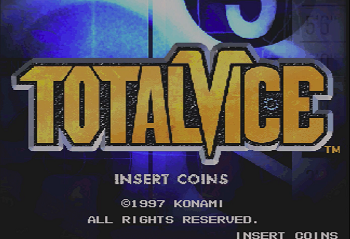 Total Vice is a Light Gun Game released by Konami for arcades in 1997. Reminiscent of Sega's Virtua Cop franchise, the game enlists players in a task force whose goal is to thwart arms smuggling in Miami, biker gang activities in Harlem, and covert terrorist operations in New York.

It is one of five arcade games (along with Evil Night, Heat of Eleven '98, Battle Tryst, and Tobe! Polystars) released on the Konami M2 hardware, which is based off the cancelled successor to the 3DO Interactive Multiplayer.

Beyond a small appearance in the Eddie Murphy comedy Showtime, little footage of Total Vice has existed...until Video Game Esoterica uploaded the first full playthrough of the game on YouTube. Check it out here