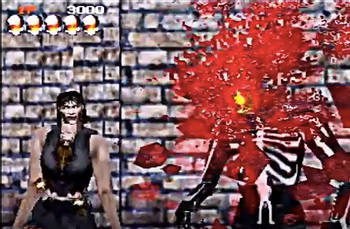 Boom, Headshot!! Shooting zombies in skeleton outfits was never this fun!
We are watching you.
— Attract Mode

Evil Night (also known as Hell Night in Japan) is a Light Gun arcade game released by Konami in 1998. The successor to Crypt Killer from 1995, the game concerns three cops battling legions of The Undead in an old, decrepit mansion in search of their missing friend.

While reminiscent of The House of the Dead, Evil Night uniquely offers three-player cooperative action: players 1 and 3 wield handguns that can charge powerful "Penetrating Bullets", while player 2 uses a pump-action shotgun. Consisting of five stages, the game's branching paths and Multiple Endings are determined by collectible items.

Thanks to its unreliable Panasonic M2 hardware and being outclassed by the House of the Dead franchise, Evil Night faded into obscurity and is extremely rare to find in arcades (much less working properly). Despite this, it has garnered a cult following, especially for its hokey voice acting.

of the game are available on YouTube, along with a third

older playthrough on the Japanese version. Other videos of the game's different endings have also surfaced.

We made it to the last room! We've got to find out what this room is for. Can we control this enormous adverse tide of entropy?