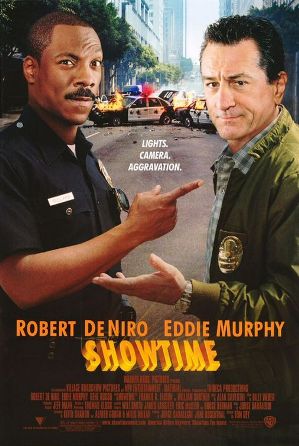 Showtime is a 2002 action comedy film directed by Tom Dey. The central plot involves LAPD Detective Mitch Preston (Robert De Niro), a By-the-Book Cop, being forced to partner up with Officer Trey Sellars (Eddie Murphy), a patrolman who dreams of being a Cowboy Cop on TV, on a reality TV show of the same name. Mitch hates the idea, his partner, and a camera following him. Trey, on the other hand, absolutely loves it all. Much of the film involves Trey trying to act out the typical police tropes and Mitch pointing out why they don't work in Real Life. The show's producer Chase Renzi (Rene Russo) also hires William Shatner to instruct the duo on how to behave like TV cops thanks to his experience playing T.J. Hooker.

The reluctant partners are investigating a new weapon that has shown up on the streets. They trace it to an arms dealer named Cesar Vargas (Pedro Damián) but are unable to prove his involvement and, instead, bond over a bar fight with Vargas and his men. When Vargas and his people rob an armored car, Mitch ends up in a car chase that gets Da Chief to suspend him and take him off the investigation. Trey is busted back to patrol. However, during the airing of the final episode of the show, Mitch notices a weapons expert who helps the investigation in Vargas's club and realizes that he's involved. Mitch and Trey break into the expert's house and find the machineshop where he manufactures Vargas's weapons. With Chase's help, they find and expose Vargas at a gun show at a hotel downtown. Vargas takes Chase hostage and locks himself in a penthouse suite. Using a literal Chekhov's Gun (a small hold-out pistol owned by Trey) that Mitch hides in a camera, he shoots Vargas, causing the latter to fall and let loose a burst from his weapon that punctures holes into the pool on the roof. The water rushes in, throws Vargas through the window, and does the same to the partners. Mitch and Trey manage to grab hold of the edge.

In the epilogue, Trey has passed the detective exam and is now officially Mitch's partner. Mitch is now dating Chase, who tells them that they will show up in the Season 2 pilot of the show in order to pass the torch to a pair of female cops who hate each other.