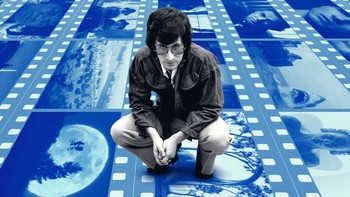 DIRECT FROM THE HEART
"He speaks cinema as if it's his native language."
—Janet Maslin
Advertisement:

When someone asks you to name a director, you probably say "Steven Spielberg". But how much do you really know about the inventor of the Summer Blockbuster (Jaws, 1975)? This 2017 documentary explores the life and career of Steven Spielberg, and how they interlink. It is told through interviews with the man himself, as well as his parents and many famous faces he's worked with through the years.

It was produced by HBO and released on October 7th, 2017.

Though born in the Midwest, Steven Spielberg grew up in Phoenix, Arizona — a state he became as enamored with as the Military Superhero. Here he was part of a very small Jewish population, though occasionally ashamed of his faith. Throughout his childhood he shot short films for fun, living near an airfield and playing adventure with his friends, recreating war scenes. When earning his photography scout badge, his father's still camera broke so he shot a short film, instead. The documentary does not mention his move to California as a high school senior and attending film school, choosing instead to highlight the "boy from Phoenix" nickname awarded him during his various trips to film studios, with various industry staff recounting it almost seemed like he hung around backlots so much that he commandeered an office in editing and the production added him to payroll rather than kicking him off. This turns the romanticism of Spielberg's introduction to filmmaking Up to Eleven, highlighting his natural talent and seeming destiny. Sid Sheinberg speaks of his discovery of Spielberg fondly, recounting a then 20-year-old cinephile Like a Son.

Spielberg also talks a lot about his family life, revealing to the people who can name seven of his films that he, in fact, has seven children. The first child he lists is the only one that's technically not his — Jessica Capshaw, who he adds that he's extremely proud of. Despite this, there is a larger focus on his past relationships with Amy Irving than current wife Kate Capshaw, who does not appear. However, there are multiple home movie clips of the Capshaw-Spielberg children in the 1990s and 2000s included as archive footage.

There is also a lot of focus put on Spielberg's working relationship with George Lucas, with Spielberg being named as the first person to believe in Star Wars when it was being proposed to the rest of the Movie Brats. This is elaborated on with Spielberg's involvement with that franchise through the decades. The documentary does in part attempt to create a rivalry here, though, pitting Lucas' Star Wars films against Spielberg's Jaws, Close Encounters of the Third Kind, and E.T. the Extra-Terrestrial. It does suggest there was a brotherhood in creating the Indiana Jones films, comparative to attributing a lot of credit for Star Wars to Spielberg where it may be unsubstantiated. The working relationship with Harrison Ford is briefly discussed.

Many of Spielberg's early films are brought to the know for the audience, including Amblin' — the inspiration for the name of his production company — and Duel, for which he was recognized as having large potential at a young age. The director also brings up his struggle to create the films exactly how he wanted with limitations of technology, values of the time, and his own relationship to the subject matter.

The technological troubles are discussed in general ranging from his very early childhood works, provoking applause for his ingenious editing skills and Stock Footage, to the quality of the shark dummy in Jaws being a large reason to create more suspense in the film as well as the world famous leitmotif, starting Spielberg's longstanding reliance on John Williams.

The values he mentions are specifically discussed in relation to his adaptation of The Color Purple, Spielberg suggesting that he did not feel wrong for being a white man to make this movie but that he did a disservice to the LGBT Community in choosing to tone down the lesbian narrative between Celie and Shug. He does not make excuses for this, though friends of the director remark on how the Spielberg family have been unapologetic advocates for equal rights for all even when it was unpopular; this is supported greatly by the number of queer works produced by and starring his wife Kate (The Love Letter, A Girl Thing) and stepdaughter Jessica (The L Word, Grey's Anatomy), and is particularly driven home when looking at the time of the film's release and Spielberg openly supporting the women of Hollywood amidst the multiple allegations of industry-colluded sexual harassment, for which he has faced no accusations himself and has instead been hailed as a gentleman in the documentary and in media at the time in late 2017.

In terms of subject matter, Spielberg's long relationship with Schindler's List is given much screentime. He bought the movie rights as soon as the book Schindler's Ark was released in 1982. However, he did not believe he was the right man for the job because of his more distant relation to the concentration camps and his lack of connection to his Jewish upbringing. He unsuccessfully tried to hire other directors, including friend Roman Polański, who refused because he had personally been incarcerated in a ghetto during The Holocaust and saw his mother die in Auschwitz. As Spielberg needed to mature into being close enough to the Holocaust to make Schindler's List, Polanski needed time to grieve over his experiences before being able to later make Holocaust movie The Pianist in 2002. By 1988, Spielberg had secured Martin Scorsese to direct, but at this point had a son, Max, and a burgeoning relationship with Kate Capshaw. He held back on making the film at this point after talking with Scorsese, the thought process given to Spielberg being that, in a few years, he may owe it to his family to have created this narrative for their collective heritage as Scorsese is not Jewish, he's Italian (he would direct the Universal remake of Cape Fear instead). After divorcing from Irving in 1989, Spielberg was reinvigorated in his faith when Kate Capshaw insisted on converting to Judaism before marrying him, and they had two children — Sasha and Sawyer — before going to Poland in 1992 to make the movie with four of the five children (Capshaw's daughter and adopted son Theo, and their children together; Spielberg's son Max was living with his mother).

The movie is in stark contrast to Spielberg's previous foray into the world of the Nazis, the 1979 comedy 1941, but also coming off the back of his more recent WW2 drama Empire of the Sun of 1987. This is credited as part of the maturation process he underwent in the late 1980s as he decided to make the film, as well as explored as a powerful Spielberg film in its own right. There is no mention of his lesser-known 1989 WW2 movie Always. Spielberg and Ralph Fiennes discuss the character of Amon in Schindler's List, and how he had to be presented as a more kind person than the real life Nazi because how evil the real man and his actions were, if shown realistically, would have seemed to be too dramatic and a stereotypically incurably evil Nazi to be believed, which they feared would distract from the story. They had to give the villain they wanted to be seen as evil some redeeming features that the real man didn't have in order to be "realistic".

Archive footage shown, where the people do not themselves otherwise appear in the documentary, includes: Goldie Hawn, Joan Crawford, Dinah Shore, Marcia Lucas (George Lucas' ex-wife) and Dan Rather behind the scenes of the Star Wars movies, and home movies of Amy Irving, Theo Spielberg, Jessica Capshaw, Sasha Spielberg, and photographs of Spielberg's other children and extended family.

Individuals featuring in the documentary, and their relation to Spielberg

Tropes present in the documentary: