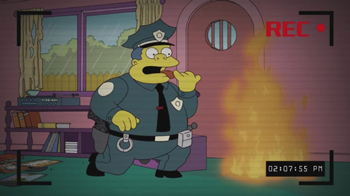 The detectives have raided a house and found some suspicious white powder or liquid. One of them puts his or her finger in it, then either sniffs it or tastes it. They pronounce it's heroin or cocaine or whatever. Or if it's phony drugs, they announce "Powdered sugar!"

The mysterious white powder (almost) never, ever, ever turns out to be a deadly poison or corrosive chemical that kills or maims our hero outright, despite the fact that he's found some powdered substance, doesn't know what it is, and is stupid enough to put it directly in his mouth. Even if it isn't poison, the amount of powder the hero tastes could very easily be far more than his system could handle.

This is Truth in Television to the extent that certain drugs (opium, for example) have a distinctive taste or odor. Cocaine can similarly be identified not by taste, but by the way it instantly numbs where it touches.note The non-psychoactive, and more easily obtained, drug lidocaine, does the exact same thing, so it's used to cut or sometimes replace cocaine. However, any modern police lab is loaded with all kinds of test equipment for just this kind of thing. Without it, it's just a cop's word on the stand. (And how reliable would that word be if they just deliberately ingested something mind-altering?) But if a chemical reaction proves it's really drugs, it's a lot harder for a lawyer to disprove, and a lot safer for the cop (see the Real Life entries). Not to mention the fact that a police officer could get in serious trouble if they were tested and found to have a drug in their system. At the very least, a cop doing this can expect Da Chief to deliver an ass-chewing for contaminating a crime scene.

If the substance is blood, you're performing The Ketchup Test. For any case of testing mysterious substances by taste or smell see Sniff Sniff Nom.