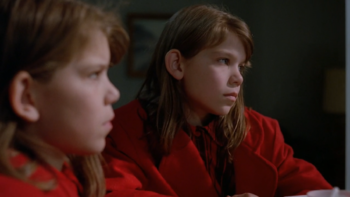 "We're your mistake."
Written by Kenneth Biller & Chris Brancato
Directed by Fred Gerber
Mulder: The Lichfield Experiment.
Deep Throat: A group of genetically controlled children. Raised and monitored on a compound in Lichfield. The boys were called "Adam" and the girls were called "Eve".
Advertisement:

Two men are murdered in identical fashions, both in front of their daughters. On opposite coasts of the USA. At precisely the same time. And the daughters are identical too. Yep, this is an X-File.