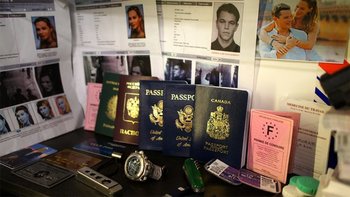 A person usually has one legal name and hence one of each type of ID with that name. After all, that's the point of an identity document: to distinguish a particular person, including categorizing them by their nationality. When someone has several (three or more) of the same kind of identity document, that's a sign there's some kind of chicanery going on. The person may be a spy, or they're involved in some sort of fraud or confidence game.

This trope generally plays out one of two ways: a person has multiple examples of the same type of identification when they should only have one (several US driver's licenses from different states, or several passports from different countries), or the person has multiple forms of ID with different names on them, usually visually linked by having photos of the same person. In either case, the collection of identity documents implies that this person is involved in something shady.

Often another character makes the discovery, with the audience either privy to it or hearing about it in later dialogue. Sometimes though, no other character is shown finding the IDs, rather the person who has them is shown to audience retrieving the collection or selecting one of them for use. If the person discovering the cache of documents is seeing pictures of themselves on the IDs and doesn't know why, then Amnesiac Dissonance is probably in play.