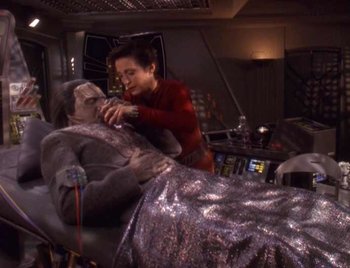 Tekeny Ghemor, the Cardassian who befriended Kira in "Second Skin", comes to the station at her request. He has been in danger on his homeworld since the Cardassians allied with the Dominion and Gul Dukat was placed in charge of the empire. Kira hopes that Ghemor will use DS9 as the base of a resistance to Dukat's rule, but Ghemor reveals that he has a terminal disease and doesn't have long to live. Kira agrees to record all the intelligence he can provide about Cardassian politics, but when information about his part in the Bajoran occupation comes to light, she's not sure if she can continue.

In other news, Weyoun is back, and the Running Gag of him being killed and re-cloned is born.