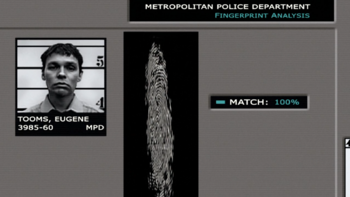 "And he should stick out in a crowd with ten inch fingers."
Written by Glen Morgan & James Wong
Directed by Harry Longstreet
Mulder: I think what we have to do is track Eugene Tooms, there's four down and one to go this year. If we don't get him right now, the next chance is in year...
Scully: 2023.
Advertisement:

An old Academy buddy of Scully's (Donal Logue) asks her and Mulder to consult on a case he is having trouble with, but when Mulder suggests that the seemingly impossible murders are being carried out by a hundred-year old cannibalistic mutant (Doug Hutchison) who attacks on a regular 30-year cycle, their help is no longer welcome. With the help of the cop who investigated their suspect in the 1960s, they are able to apprehend the killer.

Advertisement:
"All these people putting bars on their windows, spending good money on hi-tech security systems, trying to feel safe. I look at this guy and I think, 'It ain't enough'."