Literature / The Mysterious Affair at Styles 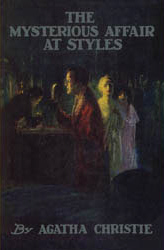 Detective novel by Agatha Christie. It was the first novel she wrote and the one where that Belgian detective of hers was introduced. Or was he French? You know the one- that funny little man with the egg-shaped head and the ridiculous moustache. Written (and set) during World War I but first published in 1920.

The novel is narrated in first person by Lieutenant Hastings, who, returning invalided from World War I, is invited by his childhood friend John Cavendish at the family manor, Styles Court. On his arrival there, he meets John’s stepmother Emily, a generous but difficult woman who has recently married Alfred Inglethorp, a man much younger than her. Hastings also meets John’s beautiful but enigmatic wife, Mary Cavendish, his nervous brother, Lawrence Cavendish, the mysterious Doctor Bauerstein, Mrs Inglethorp's companion Evelyn Howard, and her young protégé Cynthia Murdoch.

Poirot is introduced as a retired Belgian detective and an old friend of Hastings’s. He is a war refugee staying at a village near Styles Court and meets Hastings coincidentally. When Mrs Inglethorp dies, displaying symptoms alarmingly like those of strychnine poisoning, Poirot is asked and agrees to investigate the case.

A review from the Pharmaceutical Journal, which applauded “this detective story for dealing with poisons in a knowledgeable way, and not with the nonsense about untraceable substances that so often happens” was Christie’s personal favorite.

One of only two of her books that have fallen into the Public Domain; they can be read at Project Gutenberg

Christie had dedicated the book to her mother.

The novel has been adapted by ITV as the final episode for the second season of the Agatha Christie’s Poirot series starring David Suchet as Poirot, and by BBC Radio Four with John Moffat as Poirot. Tropes unique to the ITV adaptation can be found on the page for the TV series.

This work of fiction contains examples of: