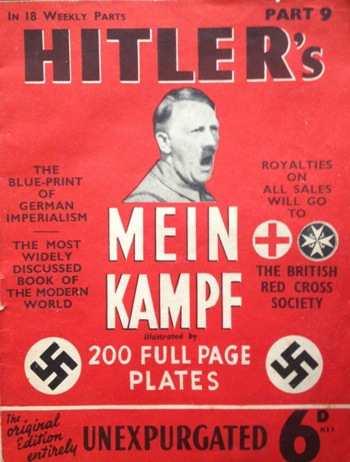 "Those who want to live, let them fight, and those who do not want to fight in this world of eternal struggle do not deserve to live."
Advertisement:

Mein Kampf is Adolf Hitler's infamous autobiography combined with a manifesto of his political ideology. Originally entitled Viereinhalb Jahre (des Kampfes) gegen Lüge, Dummheit und Feigheit, or Four and a Half Years (of Struggle) Against Lies, Stupidity and Cowardice, the book was written during Hitler's imprisonment after the Beer Hall Putsch of 1923, and published with the more concise name Mein Kampf (My Struggle) in two volumes, the first being published in 1925 and the other in 1926, prior to his rise to power in 1933.

In the first volume, Hitler wrote of his early years and his family life, his life in Vienna and his involvement in The Great War, his political activity following the war, and the initial formation of the ideas that would ten years later become the core of the National Socialist movement in Germany, interspersed with his rambling about his hatred for the Jewish people and his blame of them for the state that Germany was in after the war, drawing primary inspiration from the infamous antisemitic text The Protocols of the Elders of Zion.

The second volume details the Nazi movement itself at some length, going over everything from philosophy, ideology, organization and other topics, including trade unions, the Russians, the Stormtroopers, the use of propaganda and other factors which would come to be implemented during Hitler's rise to power.

In the wake of World War II, Mein Kampf has become one of the best selling and most banned books in the modern era.

A sequel known only as Zweites Buchnote Second Book was dictated and made but never published within his lifetime. It delves more into Hitler's ambitions to Take Over the World, which he believed required an eventual military confrontation with the United States, following the defeat of the Soviet Union, and finally a massive race war in East Asia (indicating that he was fully prepared to eventually betray Nazi Germany's alliance with Imperial Japan).

The book is not recommended for reading unless you are a history major — besides the obvious reasons, Hitler was a terrible writer. If you speak sufficient German, Serdar Somuncu has done a Dramatic Reading of the book as a comedy act, which works amazingly well and makes the dreck Hitler wrote entertaining and scary.