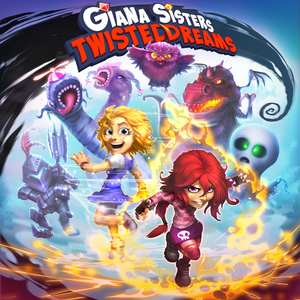 A mysterious crystal appears in Giana and Maria's bedroom, creating a portal which sucks up Maria and takes her to the dream world. Giana gives chase.

The game is the first game by Black Forest Games, a company consisting mostly of people who also took part in the development of the well-received-but-sadly-quite-unsuccessful Giana Sisters DS. The development of the game was crowd-funded through a Kickstarter campaign

under the working title Project Giana.

Gameplay-wise it stays true to its 2D platformer roots, but it uses a modern 3D graphic engine. A key gameplay element is Giana's ability to change between her normal cutesy form and her pyrokinetic punk form at will. When she does this, the dream world around her changes in the opposite way. While Cute Giana plays in a creepy nightmare, Punk Giana plays in a Sugar Bowl world. However, the graphics aren't the only difference between the two worlds. A lot of game elements behave different depending on what world Giana is currently in: platforms appear and disappear, gates open or close, elevators change directions and enemies change their behavior patterns.

As of September 11, 2013, a standalone expansion named Rise of the Owlverlord has been made available on Steam and became available to play on September 25, 2013. A sequel has been announced and Machinae Supremacy is on board to return.

It was also released on the eShop on September 5th, 2013, and has a Director's Cut disk version