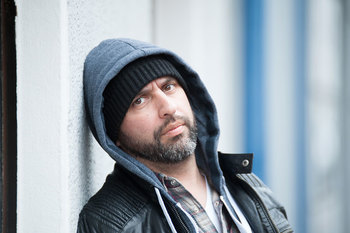 Serdar Somuncu (*1968 in Istanbul) is a German comedian born in Turkey who became famous by scenically reading Mein Kampf by Adolf Hitler as a way to make fun of that text. As absurd as that sounds it actually works surprisingly well as a comedy routine. After many years of doing that (sometimes under police protection) and a follow-up routine based on Goebbels' (in)famous Sportpalast speech (the one with the "Wollt ihr den totalen Krieg" line, which was the only one Somuncu did not read himself but rather played from tape), he felt Type Cast and instead went in a different direction creating a Hassprediger (literally hate preacher; a term usually referring to a religious extremist preacher inciting violence) persona ranting about day to day events and diverse groups insulting pretty much everybody. Due to his eloquence and his ethnic background as well as his will and ability to be confrontational about his views, Somuncu has in recent years become a somewhat frequent guest on German political talk shows, especially when migration or Islam are discussed. As of 2016 he is a semi regular contributor on the Heute Show, the German equivalent of The Daily Show.