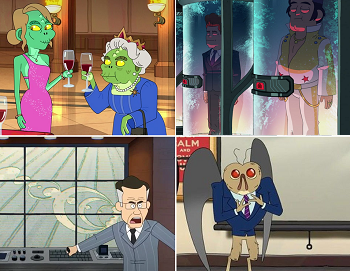 Cognito, Inc. has declassified the following conspiracy theories for your perusal.Clockwise from top left  Reptilian Conspiracy, Elvis and JFK Live, The Mothman, Crop Circles
"In the mid 1980s I was asked to compile a comic book detailing the murky history of the CIA. What I learned during the frankly horrifying research was that, yes: there is a conspiracy. In fact, there are a great number of conspiracies, all tripping each other up."
— Alan Moore
Advertisement:

Everything you've heard is true: The Illuminati rule the world, the moon landings were faked, JFK was assassinated by a bunch of gray aliens, and you surely don't think the Cuban Missile Crisis was about Cuban Missiles, do you?

Yes, that's right: In this setting, every conspiracy theory you've ever heard of is true. And some you haven't. A closely related subtrope to Fantasy Kitchen Sink, but conspiracy-minded, rather than fantastic; like its parent, there is a certain tendency towards self-contradiction, but given the source of the trope (paranoid conspiracy theories), not that surprising, and sometimes not even that damaging.

Following things are a must-have for any Conspiracy Kitchen Sink worth its salt (for required tropes, see The Index Is Watching You):

Compare Crossover Cosmology, the mythological version of this trope. Very often overlaps with World of Mysteries.

Occasionally leads to a Gambit Pileup, but not nearly as often as it should. Naturally, in all of these conspiracies there are No Delays for the Wicked.

This trope covers settings and entire series/works. For the characters who believe they live in a Conspiracy Kitchen Sink, see Conspiracy Theorist.

Matilda and Derek learn that the fashion industry is behind every modern assassination.

Matilda and Derek learn that the fashion industry is behind every modern assassination.