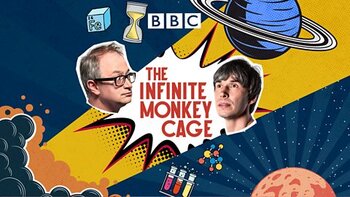 The Infinite Monkey Cage is a BBC Radio 4 comedy and science series hosted by physicist Brian Cox and comedian Robin Ince, on air since November 2009.

Each show discusses a specific science topic and normally has three guests; two scientists to offer an expert opinion, and third, normally a comedian, to add some levity. Occasionally, as in the case of Ben Miller and Dara Ó Briain (who both studied physics to Phd level), they may have a background in science too.