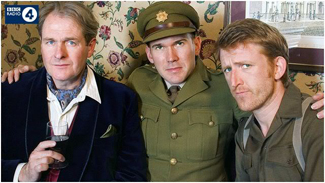 Bletchley Park, 1941. As WWII rolls on, the men and women at Bletchley work tirelessly to break German codes, matching wits with the fabled Enigma Machine.

When they aren't too busy bickering with one another, and otherwise having the most ridiculous war imaginable.

Archie (Tom Goodman-Hill) is a working-class Geordie who was rejected from Oxford by a pompous don for not knowing how to use a fish fork properly. Years later, this don re-enters his life when Charles (Robert Bathurst) is assigned to act as their hut's resident linguistics expert. Mutual hate ensues between the working-class, socialist Archie, and arrogant, old-monied, conservative Charles.

Also stationed in Hut 33 are young prodigy Gordon (Fergus Craig), IQ 196, whose mother won't let him wear proper trousers until he turns 18, and the ever-silent Winstanley. They are overseen by Third Lieutenant Joshua Featherstonehaugh-Marshall (surname pronounced 'Fanshaw', played by Alex MacQueen), kicked upstairs for driving an entire tank regiment into the sea ("The colours on the map were very misleading. I honestly thought that blue meant 'sky'."). Polish resistance fighter Minka (Olivia Colman) often drops in — with varying degrees of literalness — and rounding out the cast is cheerful, lascivious Mrs. Best (Lill Roughley), proprietor of the local pub.