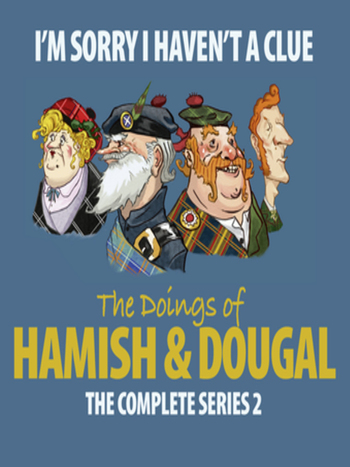 Hamish and Dougal (in full, You'll Have Had Your Tea: The Doings of Hamish and Dougal, but even the BBC usually refers to it by the shorter title) is a BBC radio Sitcom Spin-Off from the Panel Game I'm Sorry I Haven't a Clue. Graeme Garden and Barry Cryer had created the characters for the round "Sound Charades", allowing them to blether nonsense in cod-Scottish accents for a couple of minutes, while leading inexorably to an Incredibly Lame Pun of the title they were supposed to be providing a clue for, each sketch essentially taking the form of a Feghoot.

The quarter-hour episodes had a bit more structure to them, but still were basically vehicles for Incredibly Lame Puns and Double Entendres. Graeme has said that the main change was that they had to decide once and for all who was Hamish (Barry) and who was Dougal (Graeme). They were given a supporting cast; local landowner the Laird (Jeremy Hardy) and housekeeper Mrs Naughtie (Alison Steadman). Other characters (such as Big Tam at the video shop) were frequently mentioned but rarely appeared, except Mrs McAlistair the postmistress (Alison Steadman).