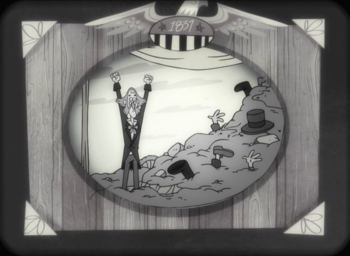 Quentin Trembley won the 1837 election in a landslide that killed the other candidates.
"And the results are in: for "Sideshow" Bob Terwiliger, 100%, and for Joe Quimby, 1%. And we remind you there is a 1% margin of error."
— Kent Brockman, The Simpsons, "Sideshow Bob Roberts"
Advertisement:

Thanks to Rule of Drama, fictional elections often come down to a tiny handful of votes, or even just a single vote. This may result in a Dark Horse Victory or a victory by the candidate commonly reckoned to be the "underdog". Sometimes a crooked machine politician will be unseated, to the shock of everyone.

Then again, sometimes one side just plain gets clobbered. When that happens, you have a landslide election. If it's really one-sided, one might even call it a "Curb Stomp Election". When these type of elections occur, they generally fall under a few basic types:

Note that all of the above have occurred in U.S. elections at some point in history.

In fiction, of course, a landslide election averts deciding by one vote, so it is most often used for comedy, rather than for drama. When used for drama, it can serve to illustrate how much the villain has made himself beloved by the public (perhaps thereby proving that Democracy Is Bad), or serve as a cathartic final victory for the good guys, proving that they have triumphed beyond doubt. This is probably a more realistic way to show that the heroes have "won" than having them win by a narrow margin, since an election won by a very narrow margin generally does not give the winner a "mandate" to do what he wants, and one may rest assured that a significant portion of the electorate will probably resent the fact that he took office.

Because this deals with the results of elections, expect spoilers.

Compare Down to the Last Play.

Hop Pop loses the election to Toadstool by 99% of the population OUTSIDE of Wartwood.

Hop Pop loses the election to Toadstool by 99% of the population OUTSIDE of Wartwood.