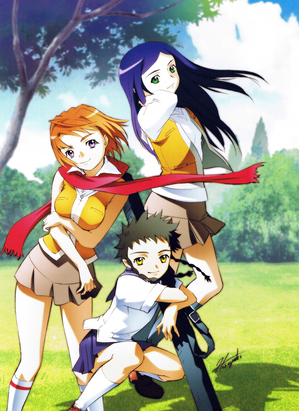 Left to right: Mai, Mikoto, Natsuki
"The Festival is about to commence! Now the time has come. If you have someone residing in your heart, then come, accept the challenge and descend upon the cursed land of Fuka! Mai-HiME!"
— Nagi
Advertisement:

My-HiME is an Anime First project that brings a postmodern sensibility to the Magical Girl genre, removing traditional elements like over-the-top speeches, transformations, and elaborate outfits in favor of an Ensemble Cast who utilize mecha-like Bond Creatures. The girls are caught up in ancient conspiracies both mundane and fantastic, and the second half of the show turns the premise on its head.

The story stars Mai Tokiha, a normal girl with a normal life. When she and her little brother Takumi take up residence at Fuuka Gakuen, their new boarding school, Mai discovers that the prestigious academy is the center of some very disturbing paranormal events. Mai also discovers that she is a HiME - supernaturally gifted with the ability to summon her "Element" (a set of strange artifacts that grant her great powers) and also bonded to a strange mecha-like creature called a CHILD. Mai realizes instinctively that the price of her new power is responsibility - but there's an additional, far more terrible price as well.

My-HiME was conceived as a multimedia project, spanning anime, manga and video game editions, all produced independently of each other with each one following a different continuity. The anime turned out to be by far the most popular imagining, but the manga has its followers. The video game, a Dating Sim created by the people behind Da Capo, was never released outside of Japan.

Followed in the 2005-2006 season by My-Otome, a completely separate series which still contains connections back to Mai-HiME. Another disparate series is Mai-HiME Destiny light novel series, which not only shifts the action to Hokkaido, but replaces Mai with a shiny new protagonist named Mayo Kagura and the HiME with MiKOs.