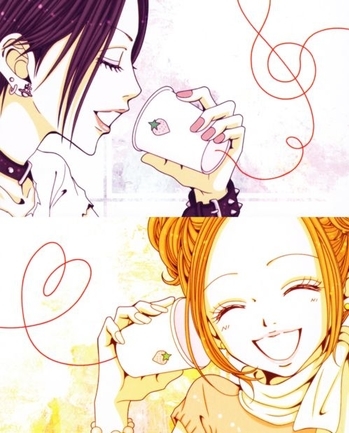 "Hey Nana, do you remember...?"
Advertisement:

Nana "Hachi" Komatsu is a 20-year-old Genki Girl from the countryside with a bad habit of falling in love at first sight. Nana Osaki is a 20-year-old punk rocker from a different small city, who's coming off a bad breakup with her boyfriend (and former bass player of her band). When "Hachi" decides to follow her boyfriend to Tokyo, and the other Nana heads there to start her music career, the two young women meet by chance on a snowbound train. They rent an apartment together several days later. Surprisingly realistic drama and an oddly romantic friendship ensues.

The manga Nana is technically Shoujo, but according to The Other Wiki, it's often been confused for

josei, and according to that same wiki, by 2005, it was the fourth best selling Shoujo manga. The first live action movie was the #2 film in Japan in 2005, behind only the then-latest film from Studio Ghibli, Howl's Moving Castle. The anime ran for 47 episodes and is licensed for distribution in North America. Both the anime and the manga are licensed by VIZ Media, Viz lost the license and the anime is now licensed by Sentai Filmworks and is streaming on Hi Dive.

The manga began serialization in the magazine Cookie in 2000, but it went on an indefinite hiatus in 2009 due to the author, Ai Yazawa, recovering from an illness. In 2013, to commemorate the 100th issue of Cookie, created a new bonus chapter.

Not to be confused with Shichinin no Nana.