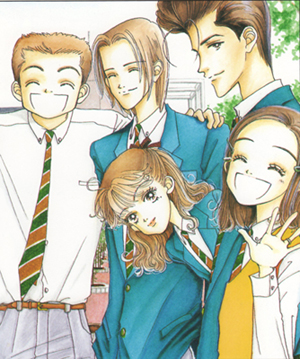 It tells the story of Midori "Angel" Saejima, a girl with a talent for drawing and a bubbly personality. She attends Hijiri High School, a newly created school in which she and her classmates are the first pupils ever. Her classmates persuade her to run for student council and while she agrees to please them, she becomes truly invested in winning after finding out that her crush Akira Sudoh is also a candidate. Since he is elected president and her as vice president,they spend a lot of time together and while they become close very fast their relationship will have to overcome several obstacles, most of them stemming from Akira's troubled past and Midori's tendency to meddle in other people's affairs, even if she always means well.

In keeping with Yazawa's love for cameos and self-reference, a couple of the characters show up in Gokinjo Monogatari.

Do not confuse with Tenshi Ja Nai.