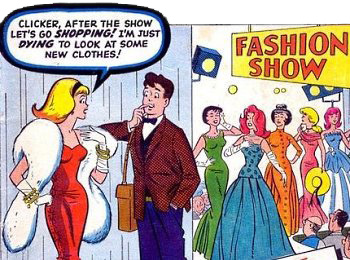 The furs and dresses here are already out of fashion!
Advertisement:

This character is, quite simply, a character whose defining trait is being well-dressed and extremely interested in fashion (and beauty).

The Fashionista is often a woman, save for instances of The Dandy, or a Camp Gay guy (whether or not he is a fashion designer). The Fashionista will invariably love to shop, read Fashion Magazines, and watch (or be involved in if she is a model or a designer) Fashion Shows, and will either have an Unlimited Wardrobe or long for one. She may be the Girly Girl in a Tomboy and Girly Girl pair. If not she will — depending on temperament — either be Alpha Bitch/Rich Bitch or Spoiled Sweet.

Either way, she is often a prime candidate for Even the Girls Want Her. At some point in the story, she is likely to wear a Little Black Dress (or a red one). She is also likely at some point to give The Makeover to a character who is either Beautiful All Along or Cleans Up Nicely.

Sometimes, The Fashionista makes her own clothes, usually if she actually works in the fashion industry or wants to. She may Really Get Around, but it is not a requirement. The Fashionista is usually skinny; it is uncommon to see a Hollywood Pudgy one, and in more cynical shows, she may have an eating disorder such as anorexia or bulimia.

An older fashionista may be a Silver Vixen, a White-Dwarf Starlet, a Stacy's Mom, or say "I Was Quite a Looker." In movies and shows from The '80s, The Fashionista may also be a Valley Girl. Whether or not she is a superheroine, she will most likely be The Chick of her Five-Man Band and have multiple costume changes over the years. If she is a supervillainess, she will most likely be a Vain Sorceress. She's not immune to Fashion Dissonance though. If she also happens to be an Action Girl then you've got a Girly Bruiser or an Action Fashionista. A Selfie Fiend is frequently a fashionista.

If the audience does not consider her a fashionista, this is Informed Attractiveness.

A Super-Trope to Fashion Designer (those who create fashion).