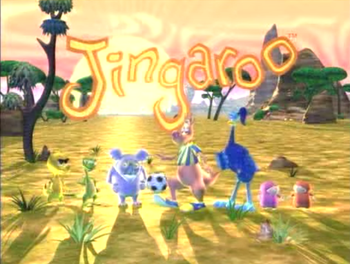 Jingaroo is a heavily obscure animated series of Direct to Video cartoons in the late 90s. It was created and produced by Beckett Entertainment, and was advertised along with miniature comics in the Beckett Pokemon Collector magazines. Animation was handled by DNA Productions.

The cartoon focused on Jingaroo, a lovable soccer-playing kangaroo who lived with his friends Sydney the frilled lizard, Victoria the emu, Jabiru the Tasmanian tiger, Toot and Snoot the marsupial moles, and Humpty Doo the koala in the Australian outback. Episodes generally focused on slice-of-life adventures, though the comics added a villain, Croco-Vile the crocodile, who had power over dreams and nightmares. 9 episodes in total were made.