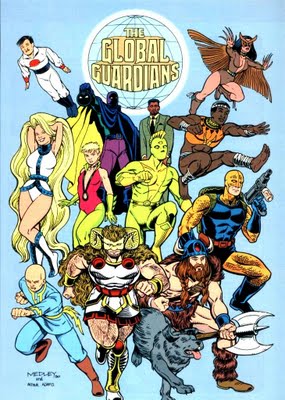 The Global Guardians is a team of international superheroes belonging to DC Comics. It was created to feature the heroes from the DC Universe that hail from places besides the United States, although its role (and many of its members) were taken over by the Justice League International team.

(Should not to be confused with the group of the same name from the Invincible comicbook, which this group precedes.)

The characters are older than the team itself. They were first introduced in issues #7-9 of the Superfriends comic book in the late 1970s. In that multi-part story, two young aliens, Zan and Jayna, (in their first comic book appearance) came to Earth to warn that Grax, an alien villain, had planted bombs on Earth's six continents to destroy the planet in revenge for being thwarted by Superman. The Justice League of America then scatters around the globe to find them, and are helped by the heroes of the various countries where they are hidden to penetrate their defenses and disarm them. In the end, however, it is the League's kid sidekicks, Wendy and Marvin, who find and beat Grax himself—and then announce that they are retiring, conveniently allowing the Wonder Twins to replace them (which happened offscreen in the TV show.)

The characters then appeared sporadically in the Super Friends comic (which explicitly was not part of the main DC Universe) but not as a team. Two of them—the Seraph (of Israel) and Jack O'Lantern (of Ireland)—even starred in their own adventures in a few backup stories.

The team itself was formed in DC Comics Presents #46 (June, 1982) in order to introduce them officially into continuity. In that story, the ancient African sorcerer Doctor Mist gathered the heroes (and Superman) to stop another, evil sorcerer's plan, and then announced they were a team to be called when he decided it was needed.

After DC's big reboot in 1985, the team was reinvented as having been organized instead by an organization called The Dome, with authorization from the United Nations. But when DC decided to reinvent the Justice League as an international team, they had the Guardians disbanded (for no good reason) and their status transferred to the League. Some former Guardians joined the team, most notably Fire And Ice. Others, such as Jack O'Lantern, were actually used as villains! (They had been brainwashed.)

The various members of the Guardians have appeared sporadically since then. Dr. Mist and Jack O'Lantern co-starred in the (short lived) series Primal Force about a team of supernatural heroes. Others were killed off to set up some villains as being really dangerous. Grant Morrison brought back some of the former members during their JLA run to join a team of (former) American super soldiers called the Ultramarine Corps who set themselves up as an international peacekeeping force (basically bringing back the concept of the Global Guardians as separate from the JLI to the DCU). They were seen in several Justice League related specials, operating out of the floating city of Superbia, up until Final Crisis.

(Note that various international heroes have been introduced by DC Comics over the years but not all have been Guardians.)

After the DC Universe was rebooted (again) the Guardians as a team were erased from existence, though some of them appeared in the Justice League International series, with Lady Godiva, Fire and Ice as mainstays, and Olympian showing up as a prospective member in the annual that closed out the series. Said annual also claimed the Guardians would form in the future and outdo the just collapsed JLI, but nothing ever came of this.

The ending of Doomsday Clock has mention of Wonder Woman working alongside the United Nations to reform the Global Guardians after multiple international super teams almost destroyed Metropolis following Superman and Firestorm being framed for committing mass murder in Russia. Each of the different super teams intend to nominate one of their members to act as their representatives in the new Global Guardians.

Tropes related to the Global Guardians: