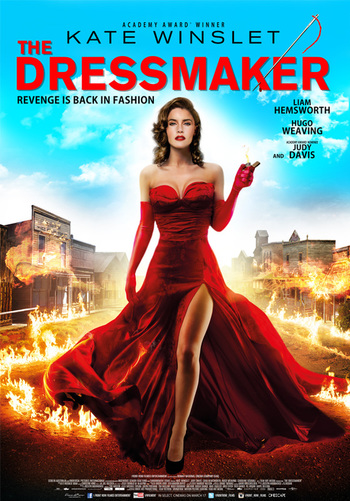 A 2015 Australian film based on the book by Rosalie Ham, starring Kate Winslet, Liam Hemsworth, Judy Davis, and Hugo Weaving.

In 1951, Myrtle "Tilly" Dunnage (Kate Winslet) returns to her childhood home of Dungatar in rural Victoria to take care of her elderly mother, known to the town as "Mad Molly" (Judy Davis). She was taken away at ten, accused of a crime she cannot remember, and has since worked in Melbourne, Paris, and London as a highly trained and skilled seamstress. However, the town has not forgotten the murder that she cannot remember. Her sewing skills regain her some favour with the townspeople, but few seem to actively like her. One of the few is Teddy McSwiney (Liam Hemsworth), star of the Dungatar football team; another is Sergeant Farrat (Hugo Weaving), the local cop with an interest in fashion.

As Tilly settles back into rural life, her relationships and the relationships of those around change and grow, but throughout, she is fearful of a curse that she believes she has, leaving her loved ones in danger and her alone...