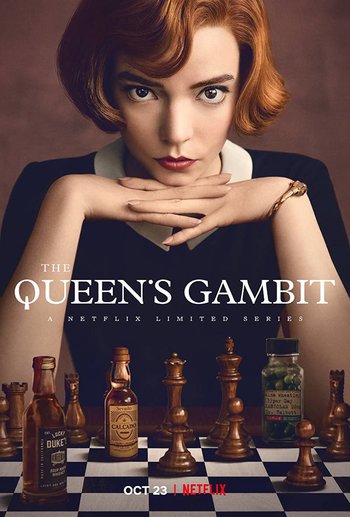 "The one thing we know about Elizabeth Harmon is that she loves to win."
"It was the board I noticed first. It's an entire world of just 64 squares. I feel safe in it. I can control it; I can dominate it. And it's predictable, so if I get hurt, I only have myself to blame."
— Beth
Advertisement:

The Queen's Gambit is a 2020 Netflix miniseries based on the 1983 novel by Walter Tevis. It was created by Scott Frank (Logan, Godless) and Allan Scott (also known as the Scottish screenwriter Allan Shiach) and written and directed by Frank. It stars Anya Taylor-Joy as an orphan who becomes a chess prodigy during the 1950s and '60s.

Elizabeth "Beth" Harmon (Taylor-Joy) is orphaned at the age of eight and placed in the Methuen Home for Girls. While residing there, she gets the custodian, Mr. Shaibel (Bill Camp), to teach her how to play chess and quickly becomes a genius at it; at the same time, the Methuen Home also provides her and the other girls with tranquilizers, which are supposed to make them compliant. Beth becomes addicted to the tranquilizers even as she becomes better and better at chess. As time goes on and she gets adopted by Mrs. Alma Wheatley (Marielle Heller), she starts entering into chess tournaments and winning money, all the while trying to cope with her addictions and emotional problems.

Tropes in The Queen's Gambit