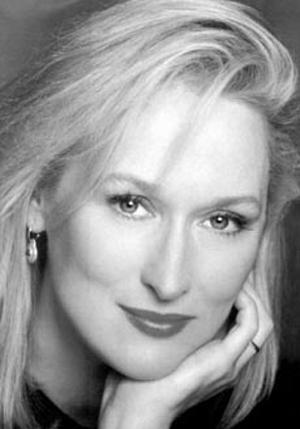 "In the nearly four years of this series, no name has been mentioned more often, or with more respect, than that of tonight's guest.... She is one of those rare actors who defines her generation, her time, and her craft."
— James Lipton, Inside the Actor's Studio 1998
Advertisement:

Mary Louise "Meryl" Streep (born June 22, 1949), widely acknowledged by critics and fans alike as the best actress working today, broke Oscar nomination records with her nomination for Best Supporting Actress (Adaptation). Now with twenty-one Oscar nominations (far more than any other actor past and present) and three wins to her credit, she has tackled virtually every genre in Hollywood, including romantic comedies (Defending Your Life), serious dramas (Sophie's Choice, Doubt), action-adventure (The River Wild), comedies (She-Devil, Death Becomes Her), classic romances (Out of Africa), and even two musicals (Mamma Mia! and Into the Woods); about the only genre she hasn't been in (yet) is a Superhero film. Easily identified by her trademark nose, she has also appeared in, among others, The Devil Wears Prada, Silkwood, Angels in America (as an elderly male rabbi, among others), and Julie & Julia. She's probably best known for starring in Sophie's Choice, The Devil Wears Prada and The Deer Hunter.

She has been described as "the successor to Bette Davis," and in fact Davis herself endorsed Meryl's early work. Her versatility and ability to act with her eyes and face are now unique in Hollywood, but the talent evident in every film is reminiscent of Davis at her best. Onscreen she plays characters with tremendous depth, but oddly Meryl has no 'trademark' - she transforms herself completely for each role she plays in a way no female Hollywood actor has done before or since. (Her facility with accents is one of the most praised weapons in her arsenal.) Although critics have described her as 'robotic' and 'acting from the neck up,' recent movies like Mamma Mia! provide evidence to the contrary.

She is currently the standard to which all other actresses and most actors as well are compared, and the phrase "You're no Meryl Streep" has been used on multiple occasions at all levels of the acting industry. In essence, she has defined the standards for not only her generation but every generation to come.

Example of:
Older Than They Look