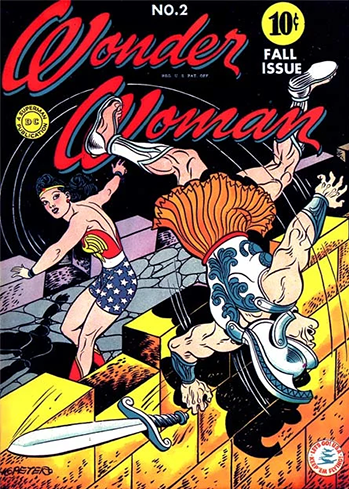 Wonder Woman's first self titled book, though she was already starring as the feature of the anthology comic Sensation Comics which was published concurrently with this volume until 1953. This volume was initially published from 1942 until 1986, used in 2010 for the Wonder Woman: Odyssey story line to celebrate the 600th issue of Wonder Woman, and then returned to once more in 2020.

Advertisement:
Volume 1 was brought to a close with Crisis on Infinite Earths after which the Amazon princess and her people were reimagined for the new DC Universe in the pages of Wonder Woman (1987).

open/close all folders
In General
Tropes which apply across all of the eras in the book.
"Charles Moulton"
Issues 1 - 29, from 1942 to 1948.Charles Moulton was a pen name used by Wonder Woman creator William Moulton Marston and his assistant Joye Murchison, who used the pen name both together and separately. Their writing paired with Harry G. Peter's art marks the book's unmistakable Golden Age era. Issue 29 was Peter on his own after Marston's death.

Each issue in this era contains three densely packed Wonder Woman stories, which are either three separate unrelated tales or three chapters telling one full tale, which may have large swaths of time between them. These stories are divided by a "Wonder Women of History" short story simplifying the life of a historically important woman into a short comic and a short two page written word story building around a central mystery. The stories in the early issues are almost entirely self contained save for Paula von Gunther's character development, and while all the stories remain easy to read as stand alone entities the final few issues start pulling together an overarching plot concerning the disgruntled slavers of Saturn, who are now out of a job.
Robert Kanigher
Issues 30 - 177 (1948 to 1969), 204 - 217 (1972 to 1975), & 286, (1981).Robert Kanigher has had the longest run as a writer for Wonder Woman to date, which if one counts liberally could be considered to have spanned twenty-two years. While his first stories are arguably still part of the The Golden Age of Comic Books and kept traditional artist Harry G. Peter he swiftly departed from the idiosyncrasies that characterized "Charles Moulton"'s run for the The Silver Age of Comic Books. The official switch over from "Earth-Two", which is where DC's Golden Age stories reside, to "Earth-One" occurred in issue 98, but the stories had already had that Silver Age flavor for quite some time before this.

Mod Era
Issues 178 - 203, from 1969 to 1972.Written by Dennis O'Neil, Mike Sekowsky & Samuel R. Delany.
Martin Pasko
Issues 218 - 232, from 1975 to 1977.
Gerry Conway
Issues 233 - 285, from 1977 to 1981.This section of issues were primarily written by Gerry Conway with Jack C. Harris as the writer for issues 243 - 254 which introduced Orana and Paul Levitz writing issues 255 - 258. At the close of Conway's run Kanigher was brought back for his final two issues. Conway would later write the final issue in this volume.
Wonder Girl Bonus
Issues 265 & 266, 1980A two issue back-up story featuring Donna Troy with writing by E. Nelson Bridwell and art by Ric Estrada.
Huntress Monthly
Issues 271 - 321, from 1980 to 1984A a feature which ran after the main Wonder Woman story for four years following Helena Wayne. The initial writer for the series was Paul Levitz with art by Joe Staton, and the final writer was Joey Cavalieri working with penciler Rod Whigham.
Roy Thomas & co.
Issues 287 - 300, from 1982 to 1983.The The Bronze Age of Comic Books was in full swing here, and while Roy Thomas was the most consistent writer for this run Marv Wolfman wrote issue 287, Paul Kupperberg wrote issue 297, Dan Mishkin wrote issues 298 and 299, and Roy often shared a writing credit with another creator, usually Paul Levitz.In General

Dan Mishkin
Issues 301 - 325, from 1983 to 1985.While Dan Minshkin was given the writing credit for most of the issues in this run Kurt Busiek wrote #318.
Mindy Newell
Issues 326 - 329, from 1985 to 1985.Mindy Newell became the second woman to write the woman of wonder and the first to actaully be credited, but she only had three issues before Gerry Conway was given the writing duties for the penultimate issue before Crisis on Infinite Earths permanently altered the universe in which Diana lived and operated.Themyscira
Wonder Woman 600 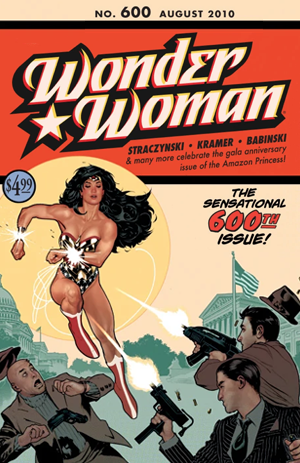 Due to its celebratory and semi-continuity detached nature the issue had numerous creative teams including writer Gail Simone with art by George Pérez for "Valedictorian", Amanda Conner as writer and artist on "Fuzzy Logic", author Louise Simonson with artist Eduardo Pansica for "Firepower", Dan Didio as writer with Scott Kolins as artist on "The Sensational Wonder Woman" and J. Michael Straczynski with Don Kramer on "Odyssey Prologue: Counter Shock". The issue contained five seperate Wonder Woman stories, a throwback to the Golden Age when her comic usually contained at least four stories rather than a single tale taking up the entire issue and continuing into the next.

Odyssey
Issues 601 - 614, from 2010 to 2011A retool by J. Michael Straczynski, designed to be detached from previous versions of Wonder Woman and pave the way for the New 52's drastic reimagining of her it remained hobbled by character deaths in the previous series and Crisis Crossovers despite Straczynski bringing in nods to as many bits of Wonder Woman lore he could fit in his short and very different run.
Return to Legacy Numbering
See the relevant pages at: